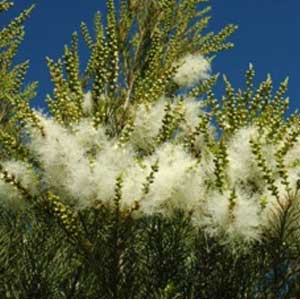 The collection includes nine artefacts that embody the historical period when Indigenous knowledges about the medicinal properties of tea tree were transformed into modern commercial applications. Matt Poll explains how it happened.

The artefacts include three spears, three boomerangs, two clubs and a shield. They were donated by the family of Hugh James and provenanced to the Coraki/Ballina area of northern NSW, one of the first regions where large-scale distillery of tea tree oil took place.

The first recorded account of tea tree being used for medicinal purposes was in 1770, when Lieutenant James Cook used the leaves to treat scurvy among his sailors. By the 1930s and 1940s, tea tree oil was widely celebrated as an antiseptic treatment. During the Second World War, Australian soldiers were issued with tea tree oil in their first aid kits.

Widely used as a distilled essential oil in alternative remedies today, the production of tea tree oil (melaleuca) is one of the oldest agricultural industries still in operation in the Ballina region of northeast NSW. The Melaleuca alternifolia tree is native to northeast NSW and southern Queensland.

What is not widely known is that tea tree oil has likely been used for medicinal purposes for thousands of years. Numerous Aboriginal communities along the east coast of Australia have a long history of using tea tree as an antiseptic for skin conditions. The leaves were crushed and applied as a paste to wounds and skin abrasions. Oils from the crushed leaves were also used to treat sore throats and coughs.

The development of the tea tree oil industry essentially transformed Aboriginal peoples’ knowledge of the medicinal use of this plant into a commercial operation. Modern law acknowledges the importance of protecting intellectual copyright of knowledges communally owned by Aboriginal peoples. However, the medicinal use of tea tree oil is one of numerous cases in Australian history when the Aboriginal knowledges specific to Australian floras were used – without attribution – by non-Indigenous people to develop commercial applications.

When the Bundjalung people of the far north coast were displaced by the expansion of nearby urban centres of Lismore and Ballina during the 1890s, a group of Aboriginal people from Coraki were relocated to a reserve at Cabbage Tree Island at the mouth of the Richmond River at Ballina. The prevalence of tea tree (also known as ‘cabbage tree’) in this region proved lucrative for local landowner Hugh James. Several Aboriginal people worked on Hugh James’ properties, harvesting large quantities of paper bark from the tea tree for the production of distilled tea tree oil.
It appears that Hugh James had a good relationship with members of the local Bundjalung language group. They presented him with a set of three spears, three boomerangs, two clubs and a shield (made specifically for him) to demonstrate traditional tool-making techniques of the Bundjalung people from the area.
These significant artefacts are now on display in the Macleay Museum. Seen in their full historical context, they represent the intersection between the ancient medicinal practices of the Bundjalung peoples and the development of a modern Australian medicinal product – a transformation (without attribution) of Aboriginal intellectual properties into numerous applications used widely today.

Matt Poll is Assistant Curator of Indigenous Heritage at the Macleay Museum.