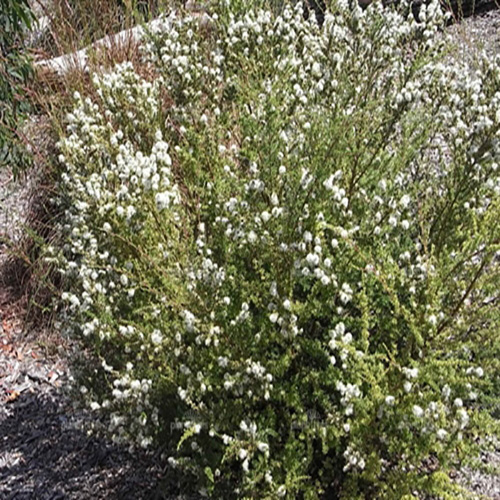 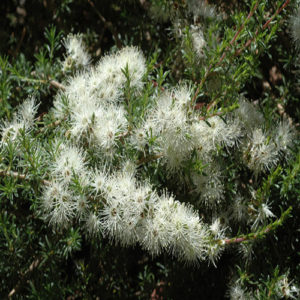 Dr. Pénoël points out that in terms of composition, Kunzea contains a large amount of ?-pinene in comparison to 1,8 cineole, which is relatively rare in plants of the Myrtaceae family. Most importantly in Kunzea, there are five different sesquiterpene compounds, which is quite unusual: globulol, viridiflorol, spathulenol, ledol and bicyclogermacrene.

Such sesquiterpene compounds are being seen as important, especially whenever inflammatory reactions need to be curbed and moderated (but not negatively suppressed).

Dr. Pénoël has used Kunzea oil with some patients both topically and through ingestion of small amounts in helping to reduce inflammatory responses in cases of Crohn’s disease and the after-effects of radiotherapy treatments with good results.

Kunzea is reported to have good pain-relieving properties, useful for muscular, tendon and joint injuries. In this case, Kunzea can be used by itself or used in combination with essential oils such as Rosemary (camphor-type), Basil (methyl chavicol-type) and Peppermint.

Kunzea has also shown results in relieving the pain of headaches and insect bites, such as from mosquitoes and spiders. It can be suggested to use a combination of equal amounts of Kunzea and Peppermint oil for these conditions. Kunzea by itself or perhaps combined with True Lavender oil, can be useful for application to small wounds and minor burns.

There have been some good results in Kunzea helping to relieve the intense pain of gout, where uric acid deposits (especially in joints of the toes) cause intense inflammation. In this case, Kunzea oil has been applied neat a number of times per day to the affected joints. A number of users have reported developing a healing rash, with uric acid being excreted through the skin. The Kunzea oil helps to control any itching of the rash.

If Kunzea oil is applied to the area after the trauma and before bruising has started or has only just begun, the development of the bruise can be prevented. Another excellent oil to prevent and relieve bruising is that of Italian Everlasting (Helichrysm italicum). Kunzea or both oils can be added at a 10% or higher concentration to Arnica infused oil (Arnica Montana flowers infused in vegetable oil) and perhaps Calophyllum oil (Calophyllum inophyllum). Both of these vegetable oils very useful in breaking up the leaked blood that causes the discoloration seen in bruises and sprains and speeds healing.

Kunzea oil has had positive results in the treatment of rashes, skin irritations, eczema and acne. Kunzea oil has been found to be non-irritant and generally is well tolerated even when used undiluted on the skin. However, in the case of eczema and allergic dermatitis, it is always recommended to test a small amount of any essential oil, as skin sensitivity is always a possibility in these conditions. This can be from a 1% to 10% concentration of an essential oil in a base (vegetable oil is fine) for this purpose.

With eczema and other skin irritations, I would recommend combining Kunzea with essential oils and extracts such as German Chamomile, Calendula carbon dioxide extract and Australian Sandalwood (Santalum spicatum).

Kunzea, with its high content of ?-pinene and some 1,8 cineole, is useful in inhalations for relieving congestion in sinus and respiratory complaints. Kunzea can be combined with oils such as Australian Eucalyptus (Eucalyptus radiata) and Tea Tree (Melaleuca alternifolia) to both address congestion and any infection present.

Kunzea oil has been tested for its effectiveness against a number of disease-causing bacteria. Kunzea is particularly effective against Staphylococcus aureus, including the MRSA variety (multiple antibiotic resistant), in a tested concentration as low as 0.16%.

Another use of the anti-inflammatory effects of Kunzea oil is reported by a Dr. Alan Lane, a physician who practices in Latrobe, Tasmania. His testimonial follows:

“I have been surprised and somewhat delighted to find another clinical use of this essential oil. I have been using intravenous sodium ascorbate (the sodium salt of Vitamin C) in my medical practice for some twenty-five years. If given on a daily basis only four or five doses can be given. Thereafter the vein becomes so irritated that further injections have to be postponed for at least seven days, usually longer, thus delaying treatment.

In one recent case I used Kunzea oil, simply rubbing it in undiluted two or three times that day after the injection. The result was that I was able to give over two hundred consecutive daily injections with no ensuing irritation at all. The therapeutic response is surprisingly fast. With one patient the results were almost instantaneous. I have used Kunzea oil in seven cases so far, all in patients with cancer.

Oncology treatment demands many intravenous injections and the same problems arise as with sodium ascorbate. Kunzea oil gives promise of being of significant effect in routine every day oncological therapy with chemotherapeutic agents and of use in other areas of medical care.

In another condition, atopic eczema, this essential oil seems to be useful in local application to skin. In one particular case the result was very significant. It deserves further investigation.”

Hence, Kunzea oil holds promise in alleviating the pain and inflammation whenever multiple intravenous injections are required. Dr. Lane used undiluted Kunzea oil. Another option would be the use of Kunzea at a 50% concentration in 50% vegetable oil, especially Calendula Infused oil, well known for its anti-inflammatory effects.

The overall composition of Kunzea oil, with a low content of 1,8 cineole, sees it as a safe, non-toxic essential oil for general use. There is no contraindication for the use of Kunzea oil during pregnancy at common dosages.

It is well tolerated on the skin, even with undiluted use. As with all essential oils, keep out of reach of children and consider testing a small amount on the skin first with those with eczema and other skin sensitivities.

In summary, Kunzea is a new and unique essential oil that shows much promise, particularly in the areas of relieving pain and inflammation.

Top note: a mild eucalyptus with a myrtle direction