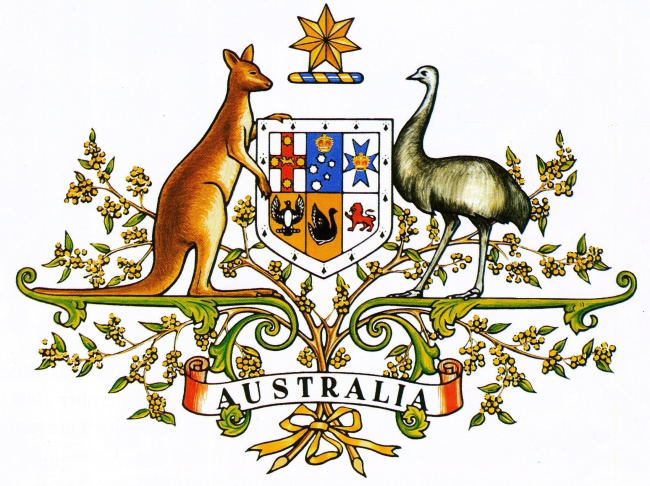 Coat of Arms. The Commonwealth Coat of Arms is the formal symbol of the Commonwealth of Australia. … These symbols are enclosed in a border to represent federation in 1901 when the states united to form a nation. The shield is held by two native Australian animals, a kangaroo to the left and an emu to the right.

“Both the Kangaroo and the Emu were selected for the Coat of Arms as they are the only animals in the world that cannot run backwards.”

The first grant of armorial ensigns, crest and supporters to the Commonwealth of Australia was made in 1908; a new design was granted by Royal Warrant in 1912.

The Commonwealth Arms is commonly but incorrectly referred to as the ‘Commonwealth Crest’. Strictly the Crest is the device above shield and helmet on a coat of arms; in Australia’s case, it is the seven-pointed gold star on the wreath.

The Australian Coat of Arms consists of:

The shield is enclosed by an ermine border, signifying the federation of the States into the Commonwealth.

The Crest of the Arms, consisting of a seven-pointed gold star on a blue and gold wreath. Six points represent each of the States of the Commonwealth, the seventh point represents the Commonwealth Territories.

Usually, the Arms are depicted in a compartment adorned with wattle (Acacia pycnantha) leaves and inflorescence, and a scroll with the word “AUSTRALIA” on it under the Arms. The wattle and the scroll and the rests for the Kangaroo and Emu do not constitute part of the Arms.

The devices for each of the six States on the Arms are represented on the Blue Ensigns that are the official state flags.