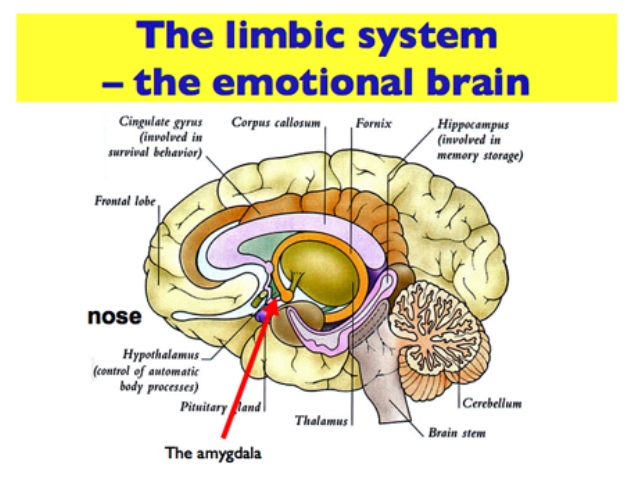 [vc_single_image image=”36523″ img_size=”large” alignment=”center”][vc_custom_heading text=”General Psychology -The Emotional Nervous System” google_fonts=”font_family:Satisfy%3Aregular|font_style:400%20regular%3A400%3Anormal”]Emotion involves the entire nervous system, of course, but there are two parts of the nervous system that are especially significant:

The limbic system and the autonomic nervous system.

The limbic system is a complex set of structures that lies on both sides of the thalamus, just under the cerebrum.
It includes the hypothalamus, the hippocampus, the amygdala, and several other nearby areas.
It appears to be primarily responsible for our emotional life, and has a lot to do with the formation of memories.
In this drawing, you are looking at the brain cut in half, but with the brain stem intact.
The part of the limbic system shown is that which is along the left side of the thalamus (hippocampus and amygdala) and just under the front of the thalamus (hypothalamus):

The hypothalamus is responsible for regulating your hunger, thirst, response to pain, levels of pleasure, sexual satisfaction, anger and aggressive behavior, and more.  It also regulates the functioning of the autonomic nervous system (see below), which in turn means it regulates things like pulse, blood pressure, breathing, and arousal in response to emotional circumstances.

The Hippocampus appears to be very important in converting things that are “in your mind” at the moment (in short-term memory) into things that you will remember for the long run (long-term memory).  If the hippocampus is damaged, a person cannot build new memories and lives instead in a strange world where everything they experience just fades away, even while older memories from the time before the damage are untouched!

This very unfortunate situation is fairly accurately portrayed in the wonderful movie Memento, as well as in a more light-hearted movie, 50 First Dates.  But there is nothing light-hearted about it:   Most people who suffer from this kind of brain damage end up institutionalized.

Related areas: Besides the hypothalamus, hippocampus, and amygdala, there are other areas in the structures near to the limbic system that are intimately connected to it:

The cingulate gyrus is the part of the cerebrum that lies closest to the limbic system, just above the corpus collosum.   It provides a pathway from the thalamus to the hippocampus, seems to be responsible for focusing attention on emotionally significant events, and for associating memories of pain and to smells. (The aromatherapy trigger is the Olfactory Bulb in the diagram)

The ventral tegmental area of the brain stem (just below the thalamus) consists of Dopamine pathways that seem to be responsible for pleasure.  People with damage here tend to have difficulty getting pleasure in life, and often turn to alcohol, drugs, sweets, and gambling.

The basal ganglia are responsible for repetitive behaviours, reward experiences, and focusing attention

The prefrontal cortex is also closely linked to the limbic system.  Besides apparently being involved in thinking about the future, making plans, and taking action, it also appears to be involved in the same dopamine pathways as the ventral tegmental area, and plays a part in pleasure and addiction.

Activation of the sympathetic nervous system has the following effects:

One of its most important effects is causing the adrenal glands (which sit on top of the kidneys) to release epinephrine (aka adrenalin) into the blood stream.  Epinephrine is a powerful hormone that causes various parts of the body to respond in much the same way as the sympathetic nervous system.  Being in the blood stream, it takes a bit longer to stop its effects.  This is why, when you get upset, it sometimes takes a while before you can calm yourself down again!

Some of the details of parasympathetic arousal include…

The parasympathetic nervous system also has some sensory abilities:  It receives information about blood pressure, levels of carbon dioxide in the blood, and so on.